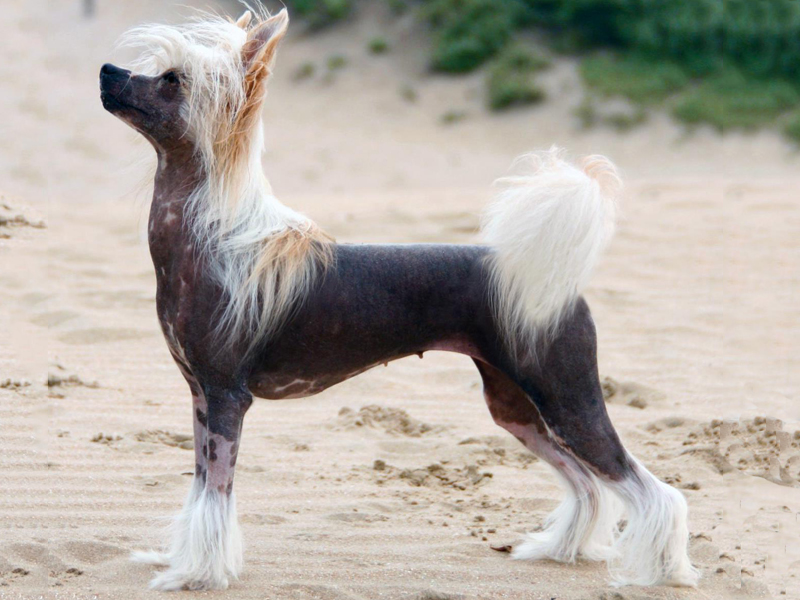 Brief historical summary: The Chinese Crested Dog comes in two varieties - the Hairless and the Powder Puff. The ‘Hairless’ have a crest of hair on their head extending part way down their neck, ‘socks’ covering their toes, and a plume on their tail. The rest of their body is, as their name implies, hairless. The ‘Powder Puff’ variety is covered entirely with a veil of long soft hair. While it is difficult to pinpoint their origin, it is said that they were owned by families of the Han Dynasty of China. The Chinese Cresteds were developed at this time as guardians of the treasure houses and, in a larger, heavier form, as hunting dogs. They were seen at shows in America from 1885 to 1926 but then were rarely ever seen for some fifty years.
General appearance: A small, active and graceful dog; medium-to fine-boned, smooth hairless body, with hair on feet, head and tail only; or covered with a soft veil of hair. Two distinct types of this breed: Deer type, racy and fine-boned, and Cobby type, heavier in body and bone.
Behaviour and temperament: Happy, never vicious.
Head : Smooth, without excess wrinkles. Distance from base of skull to stop equal to distance from stop to tip of nose. Head presenting graceful appearance with alert expression.

Eyes:  So dark as to appear black. Little or no white showing. Medium size, almond in shape. Set wide apart.
Ears:  Set low : highest point of base of ear level with outside corner of eye. Large and erect, with or without fringe, except in Powder Puffs where drop ears are permissible.
Neck: Lean, free from throatiness, long and sloping gracefully into strong shoulders. When moving, carried high and slightly arched.
Body: Medium to long, supple.
Back: Level.
Loin: Taut.
Croup: Well rounded and muscular.
Chest: Rather broad and deep, not barrel-ribbed. Breast bone not prominent. Brisket extending to elbows.
Underline and belly: Moderate tuck-up.
Tail: Set high, carried up or out when in motion. Long and tapering, fairly straight, not curled or twisted to either side, falling naturally when at rest. Plume long and flowing, confined to lower two-thirds of tail. Sparse plume acceptable.

Hindquarters:
General appearance: Hindlegs set wide apart. Angulation of the rear limb must be such as to produce a level back.
Stifle (Knee): Firm and long, sweeping smoothly into hock.
Metatarsus (Rear pastern): Hocks well let down.
Hind feet: Extended hare-foot, narrow and long. Nails any colour, moderately long. Socks ideally confined to toes, but not extending above top of pastern. Feet turning neither in nor out.

Gait / Movement: Long, flowing and elegant with good reach and plenty of drive.
Skin: Fine-grained, smooth, warm to the touch.
Coat:
Hair: No large patches of hair anywhere on body. A long and flowing crest preferred, but sparse acceptable; ideally beginning at stop tapering off down neck. In Powder Puffs coat consists of an undercoat with soft veil of long hair, veil coat a feature.
Colour: Any colour or combination of colours.
Size and weight: Ideal height at the withers: Males: 28-33 cms. Females: 23–30 cms.
Faults: Any departure from the foregoing points should be considered a fault and the seriousness with which the fault should be regarded should be in exact proportion to its degree and its effect upon the health and welfare of the dog.

The latest amendments are in bold characters.