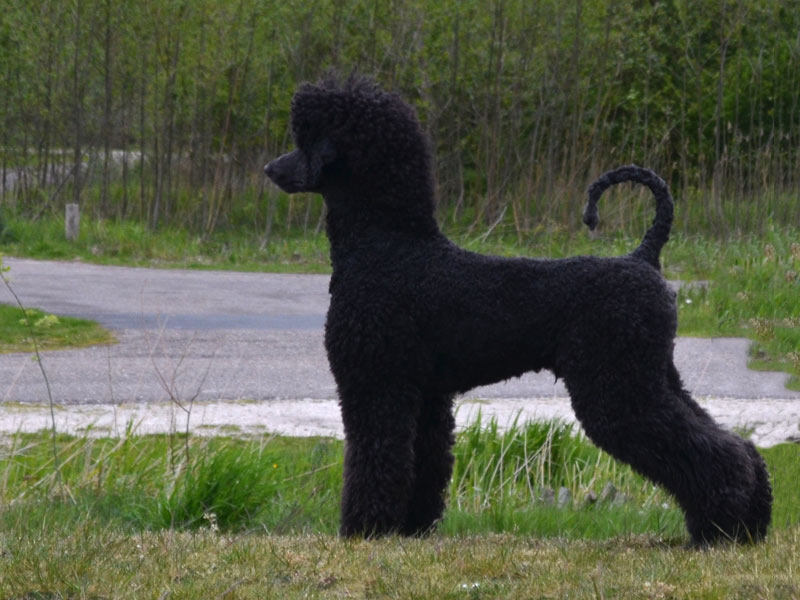 Brief historical summary : Etymologically, the French word “caniche” (Poodle) comes from “cane”, the French word for a female duck. In other countries, the name of the breed is associated with splashing around in water. Originally, this dog was used for wildfowling. It descends from the Barbet of which it has conserved many characteristics. In 1743, it was called the “caniche”: the female of the barbet in French. Thereafter the Barbet and the Caniche (Poodle) were gradually separated. Breeders worked hard to obtain original subjects of uniform colour. The Poodle became very popular as a companion dog because of its friendly, joyful and loyal character and also because of its four sizes and different colours which everyone can choose according to preference.
General appearance: Dog of medium proportions, with a characteristic frizzy coat which is either curly or corded. The appearance is that of an intelligent dog, constantly alert and active, harmoniously built, giving an impression of elegance and pride.
Important proportions: The length of the muzzle is approximately 9/10 of that of the skull. The length of the body (scapulo-ischial) is slightly more than the height at the withers.  The height at the withers is practically equal to the height at the croup. The height at the elbow is 5/9 of the height at the withers.
Behaviour / temperament: A dog renowned for its loyalty, capable of learning and being trained thus making it a particularly pleasant companion dog.
Head: Distinguished, rectilinear and in proportion to the body. The head must be well chiselled and neither heavy nor excessively fine.
Cranial region:
Skull: Its width is less than half the length of the head. The entire skull, seen from above, appears oval and seen from the side, slightly convex. The axes of the skull and muzzle are slightly divergent. The superciliary arches are moderately pronounced and covered with long hair. The frontal furrow is wide between the eyes, narrowing towards the occiput, which is very pronounced. (In Miniatures it can be slightly less pronounced).
Stop: Only slightly pronounced, but can never be absent.
Facial region:
Nose: Developed, vertical profile; open nostrils. Black nose in black, white and grey subjects; brown nose in brown subjects. In fawn (apricot/red) subjects, the nose should be black or brown according to the intensity of the fawn colour. In light fawn subjects the nose should be as dark as possible.
Muzzle: Upper profile is perfectly straight; its length is approximately 9/10 of that of the skull. The branches of the lower jaw are almost parallel. The muzzle is strong. The lower profile of the muzzle is determined by the lower jaw and not by the edge of the upper lip.
Lips: Moderately developed, rather tight, of medium thickness with the upper lip resting on the lower lip without hanging over it. Black in black, white and grey subjects; brown in brown subjects. In orange fawn [apricot] and in red fawn subjects, the lips are more or less dark brown or black. The corner of the lips must not be pronounced.
Jaws/Teeth: Complete scissor bite. Strong teeth.
Cheeks: Not prominent, shaped on the bones. The sub-orbital regions are chiselled and very slightly filled. Zygomatic arches very slightly pronounced.
Eyes: Keen expression, placed at the level of the stop and slightly oblique. Almond shaped. Black or dark brown colour. In brown subjects, the colour may be dark amber. The eye rims are black in black, white and grey subjects. Brown in brown subjects. In light fawn subjects the eye rims should be as dark as possible. Ears: Rather long, falling along the cheeks, set on in the prolongation of a line going from the top of the nose and passing under the outer
corner of the eye; flat, widening after the attachment and rounded at the tip, they are covered with very long, wavy hair. The leather should reach – or ideally pass – the corner of the lips when pulled forward.
Neck: Strong, slightly arched after the nape, of medium length and well proportioned. The head is carried high and proudly. The neck, without dewlap, is of oval cross section. Its length is slightly less than that of the head.
Body: Well proportioned. It is slightly longer than the height at the withers.
Top line: harmonious and taut.
Withers: Moderately developed. The height at the withers is practically equal to the height from the top of the croup to the ground.
Back: Short.
Loin: Firm and muscled.
Croup: Rounded but not falling away.
Chest: Reaching the elbow; its width is equal to 2/3 of its depth. Forechest, the point of the sternum should be slightly prominent and set rather high. In Standard Poodles, the perimeter of the thorax, measured behind the shoulders, should measure 10 cm more than the height at the withers. Oval cross section, broad at the dorsal part. Underline and belly: Tucked up but not excessively so.
Tail: Set on quite high at the level of the loin (ideally carried at a “ten past nine” compared to the topline).

Addition to standard
Judging a Poodle in a show does not mean it is judged in a grooming contest. It is not encouraged to stimulate overgrooming one’s dog.

Authorized show clips
“Lion Clip”: The Poodle, whether curly or corded, shall be clipped on the hindquarters up to the ribs. Also clipped: the muzzle, above and underneath from the lower eyelids; the cheeks; the forelegs and hindlegs, except for the cuffs or bracelets and optional motifs on the hindquarters; the tail, except for round or oblong terminal pompom. A moustache is required for all subjects. Leaving hair, called “trousers”, on the forelegs is admitted.
“Modern Clip”: Leaving hair on all four legs is only admitted on condition that the following norms are respected:
1.Shall be clipped:
a) The lower part of the forelegs, from the nails to the tip of the dewclaw, the lower part of the hindlegs to the same height. Machine clipping, limited to the toes only, is admitted.
b) The head and the tail in compliance with rules described above.
Shall be exceptionally admitted in this clip:

2. Shortened coat:
Over the body, in order to give “shot silk” effect on the line of the back, more or less long but at least 1cm. The length shall be gradually increased over the ribs and above the limbs.
3. Neatened coat:
a) On the head which keeps a topknot of reasonable height as well as down behind the neck to the withers and the front, without discontinuity, to the shaven part of the foot following a slightly slanting line from the top of the
forechest downwards. On the top of the ears and for a maximum of one third of their length, the coat may be cut with scissors or clipped in the direction of the hair. The lower part shall be left covered in hair whose length shall
increase gradually, from top to bottom, to end in fringes which may be levelled.
b) On the limbs, “trousers” making a distinct transition from the shaven part of the feet. The length of the hair increases gradully towards the top to display, on the shoulder and likewise the thigh, a length of 4 to 7 cms measured by
pulling the hair to straighten it, in proportion to the size of the exhibit while avoiding any “fluffy” effect. The hind “trousers” must allow for the typical angulation of the Poodle
to be seen. All other fancy clips which do not comply with these norms
are eliminatory. Whatever the standard outline obtained by grooming, it should have no influence whatsoever on the placements in shows, all exhibits in the same class should be judged and placed together.
“English Clip”: To the “Lion Clip” add motifs on the hindquarters, i.e. bracelets and cuffs. On the head: a topknot. For this clip the moustache is optional. The absence of demarcation on the hair of the hindquarters is tolerated. The topknot is optional (it is forbidden to use lacquer or any other substance to keep the topknot in place).
“Puppy Clip”: Takes over the several shaven parts which characterize the Modern clip. On the head: a topknot of a reasonable height. The coat on the forequarters should form a ball, comparable to an ‘egg’ seen from the forechest up to the topknot. The so-called ‘trousers’ on the forequarters is preserved, accentuating the typical poodle angulation. The tail – save for a pompon – should have an oval or oblong shape. It should be clipped longer than wide with rounded angles.
“Scandinavian clip or Terrier clip”: The clip is similar to that of the Modern clip, the difference being that the ears and tail may be shaven. The latest amendments are in bold characters.