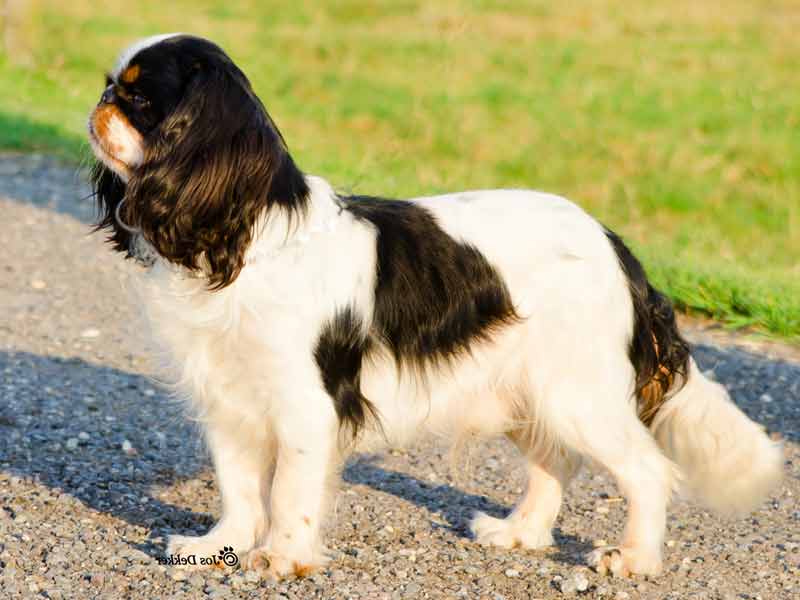 Brief historical summary: An obvious relative of the Cavalier King Charles Spaniel, this dog is known in some countries as the English Toy Spaniel, and derives his name from a dog which was a great favourite of King Charles II. Toy spaniels have long been treasured as pets both in England and on the Continent and were bred to a smaller and smaller size from setter dogs which established the type for spaniels. Basically these were little gun dogs, but pampered by wealthy owners, admired for their companionship and crossed with toy dogs from the East, giving rise to their facial appearance.
General appearance: Refined, compact and cobby.
Behaviour and temperament: Happy, intelligent, toy spaniel, with distinctive domed head. Reserved, gentle and affectionate.
Head
Cranial region:
Skull: Moderately large in comparison to size, well domed, full over eyes.
Stop: Between skull and nose well defined.
Facial region:
Nose: Black, with large, wide-open nostrils, short and turned-up.
Muzzle: Square, wide and deep, well turned up.
Lips: Exactly meeting, giving nice finish.
Jaws/Teeth: Lower jaw wide. Bite should be slightly undershot. Protruding tongue highly undesirable.
Cheeks: Not falling away under eyes, but well cushioned.
Eyes: Relatively large and dark, set wide apart, eyelids block square to face line, pleasing expression.
Ears: Set on low, hanging quite flat to cheeks, very long and well feathered.
Neck: Of medium length; arched giving proud carriage of head.
Body:
Back: Short and level.
Chest: Wide and deep.
Tail: Docking previously optional. Docked: Well feathered, not carried over or above level of back. Undocked: Well feathered, not carried over or above level of back. In overall balance with the rest of the dog.

Weight:
Weight: 3.6-6.3 kgs.
Faults: Any departure from the foregoing points should be considered a fault and the seriousness with which the fault should be regarded should be in exact proportion to its degree and its effect upon the health and welfare of the dog.
Disqualifying faults