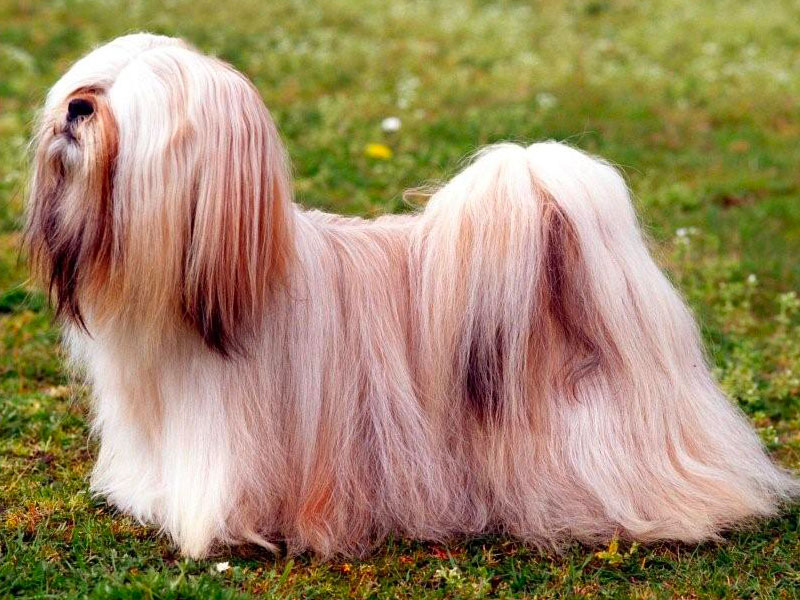 Brief historical summery: The Lhasa Apso comes from Tibet where many live at high altitudes and the climate can be severe. He has to be a hardy little dog to withstand these conditions, and this has had a great influence on his development. His long, hard coat with its dense undercoat acts as insulation during winter, and the fall of hair over his eyes protects them from the wind, dust and glare. The Apso is one of several Eastern breeds to come to the West. The first Apsos arrived in Britain in the early 1920s and were being shown in London soon after. When they were first seen in Britain they were confused with other shaggy Oriental dogs and all were labelled ‘Lhasa Terriers’. Later a distinction was made, especially between the Apso and the Tibetan Terrier which is thought to have been behind the early Apsos. A breed club for the Lhasa Apso was established in Britain in 1933.
General appearance: Well balanced, sturdy, heavily coated, without excess.
Important proportions: Length from point of shoulders to point of buttocks greater than height at withers.
Behaviour and temperament: Gay and assertive. Alert, steady but somewhat aloof with strangers.
Head: Head furnishings with fall over eyes; but not affecting the dog’s ability to see, good whiskers and beard.
Cranial region:
Skull: Moderately narrow, falling away behind eyes, not quite flat, but not domed or apple headed.
Stop: Medium.
Facial region:
Nose: Black.
Muzzle: About 4cms, but not square; length from tip of nose roughly one third of total length from nose to back of skull. Foreface straight.
Jaws / Teeth: Upper incisors close just inside lower i.e. reverse scissor bite. Incisors in a broad and as straight a line as possible. Full dentition desirable.
Eyes: Dark. Medium size, frontally placed, oval, neither large nor full, nor small and sunk. No white showing at base or top.
Ears: Pendant, heavily feathered.
Neck: Strong and well arched.
Body: Balanced and compact.
Topline: Level.
Loin: Strong.
Chest: Ribs extending well back.
Tail: High set, carried well over back but not like a pot-hook. Often a kink at end. Well feathered.

Limbs
Forequarters:
Shoulder: Well laid back.
Forearm: Forelegs straight, heavily furnished with hair.
Forefeet: Round, cat-like with firm pads. Well feathered.
Hindquarters:
General appearance: Well developed with good muscle. Good angulations. Heavily furnished with hair.
Metatarsus (Rear pasterns): Hocks when viewed from behind parallel and not too close together.
Hind feet: Round, cat-like with firm pads. Well feathered.
Gait / movement: Free and jaunty.
Coat:
Hair: Top coat long, heavy, straight, hard neither woolly nor silky. Moderate undercoat. Coat never impeding action.
Colour: Golden, sandy, honey, dark grizzle, slate, smoke, particolour, black, white or brownish. All equally acceptable.
Size:
Ideal height at the withers: Males: 25 cms, females slightly smaller.
Faults: Any departure from the foregoing points should be considered a fault and the seriousness with which the fault should be regarded should be in exact proportion to its degree and its effect upon the health and welfare of the dog.
Disqualifying faults